If your existing taps don’t have an isolating valve, you’ll need to turn off the water supply (both hot and cold), and then turn on all the taps in your house until they run dry.

It can be very difficult to unscrew the nuts that connect your old taps to the water supply pipes. If that’s the case, you can use a pipe cutter to cut through the pipes and then connect your new taps using flexible push-fit tap connectors. It’s a good idea to get these connectors with isolating valves, just in case you ever need to cut off the supply to one or both taps for future maintenance.

Reach up and unscrew the holding nuts of the old taps. You’ll need a sink wrench to undo the tap connector nuts that hold the taps to the pipes, and a cranked spanner to remove the back nuts securing the taps to the sink. 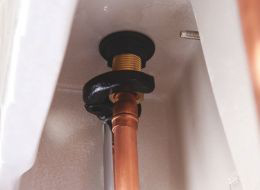 Lift out the old taps. If they won’t budge even after you’ve taken off the holding nuts, they might be stuck in place with old putty. If this is the case, just tap them lightly from below with a wooden mallet to loosen them. Before you fit your new taps, make sure that the ceramic surround is clean.

Fasten your new taps from underneath with the washers and mounting nuts supplied with them. The hot tap goes on the left, and the cold on the right. 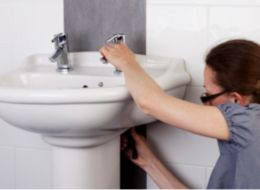 You can either re-attach the existing pipework or use 15mm flexible tap connectors (don’t forget to include the fibre washers, though). Clean any paint or tarnish from the pipes using wire wool and check there’s no debris in the new taps before you make the attachments. Finally, turn the water back on and check that the taps are working without any leaks. 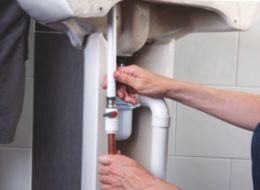 Remember to recycle the old taps in the correct recycle bin for your area. Alternatively, for the more money conscious, try to get some cash back by posting on Ebay, Gumtree, Trading post etc.