Termites have lived on Earth for more than 250 million years. While termites can be helpful in breaking down rotting wood in the environment, these wood-destroying insects also can cause extensive damage to homes. Sometimes called “silent destroyers,” termites may leave few signs of activity as they steadily consume wood and sheetrock paper in the walls, ceilings and floors of homes. It is highly recommended to both install a protection system and have it fully maintained by professionals. This is one of those protection systems you just cant chance not having. To be contacted regarding protection, click here (link to termguard form).

Subterranean termites are highly destructive to common building timbers. They can rapidly eat out the internal sections of structural timbers – devouring mainly the spring wood, and preferring to leave the harder summer wood sections.

As a result, infested timbers are often left as a thin shell with a honey-comb of layered hollow sections (as illustrated) packed with moist soil. These termites love a moist dark damp environment – it is essential for their survival – discussed in detail under Biology of Subterranean Termites – later on.

The subterranean termite is a serious economic timber pest causing millions of dollars of damage throughout the areas where it is located. It is estimated that more than 1 in 5 homes in the high activity areas, been or will be attacked at sometime by these voracious little insects.

The life-cycle of subterranean termites 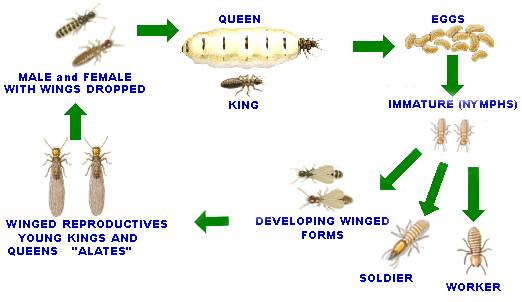 Within a termite nest there are members of different castes, each with a different role to perform and all interdependent upon each other for survival of the colony. These include the queen, king, the winged reproductive (young kings and queens), soldier and worker termites. 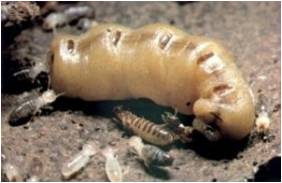 The king, queen and worker termites. 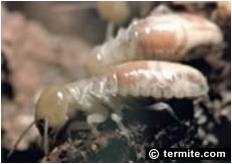 The queen termite is an egg laying machine; her body is enormous compared to her off-spring; she can live more than 25 years and produce more that 2,000 eggs a day.

The king and queen live in a central chamber and are tended by the workers.

The workers are by far the largest caste in the subterranean termite colony and the one that does the damage; they are a creamy translucent colour, soft bodied and carry out all work in the nest, including gathering food (timber and other cellulose); constructing tunnels; repairing and enlarging the colony nest; grooming each other and feeding the soldiers, the king, queen and also caring for the young nymphs until mature. IDENTIFICATION: subterranean worker termites are small in size, about half the size of match-head or 1/8″ long and are soft bodied insects. They have no wings, are sterile, blind and work 24 hours a day for their entire 2 year life span.

The soldiers are the defenders of the colony, particularly against marauding ants – with whom they have engaged in a relentless war lasting 250 million years.

The soldiers have an orange coloured rectangular armoured head with mandibulate pinchers which they use to crush the ants. On their forehead is a fontanelle (frontal gland pore) used to emit a sticky latex to ensnare the ants. Its mandibles are curved at about 70~90 degrees. The body of the subterranean termite is flat and almost as wide as the head, with the width of approx 1/32”. The soldier termite is usually the first to be seen in large numbers when any active termite workings (mud shelter tubes or damaged timber) are opened. Soldier termites will rush out to guard the opening whilst worker termites repair the breach.

The swarmers (reproductives) are called “alates” and are commonly seen when they swarm during daylight; they have eyes; are poor fliers but are swept along by the wind; they land, drop their wings, find a mate to become king and queen of a new termite colony. IDENTIFICATION: The subterranean termite swarmers are about 3/8″ long (including wings) with a dark brown body and a small fontanelle (frontal gland pore) on its head. Their wings are brownish grey with two dark solid veins along the forefront of the front wings. The front wing is distinctly larger than hind wing. WHEN DO THEY SWARM? In the northern part of their range, swarming takes place in the spring, but without rain. In the southern areas, swarming usually follows rain. The swarmers are emitted in their thousands when a mature termite nest is large and well established. Subterranean termites swarm in large numbers over a wide area to find a mate from another colony nest to start up a new colony. A suitable location for nesting should provide moisture and a readily available timber food source close by.

Colony nest development is slow in the first few months, with the egg-laying capacity of the new queen termite peaking after a few years, producing up to 10,000 offspring a year. The queen may live for many years and workers up to two years. The swarmers are emitted in their thousands when a mature termite nest is large and well established. Swarmers are usually produced after this period and are an indication a large termite nest is in the vicinity, a sure danger sign and a warning that professional protection is required. Several years are required before the termite colony reaches the typically mature size. In some locations an subterranean termite colony can contain several million termites foraging over a wide area (up to 12,000 square feet) and actively feeding on trees and freestanding poles as well as buildings and other timber structures. The colony nests of subterranean termites are usually located in the ground below the frost line, but above the water table. Mud galleries or “shelter tubes” are constructed across hard objects in order to gain access to timber food sources. Subterranean termites constantly search for new food sources. They are known to enter buildings through cracks in concrete flooring or to travel under parquetry or tile flooring through gaps of less than 1/16″ wide. Where moisture regularly collects inside the wall or other cavities of a building, say from faulty plumbing or broken roof tiles, the subterranean termite can develop a subsidiary colony nest which may not require contact with the ground to ensure it’s survival.

The picture on the left shows a termite inspector examining an above ground termite subsidiary nest built inside a wall cavity of a home. Termites often build such nests if moisture is allowed to regularly collects inside the wall cavity, say from leaking pipes, shower recess, faulty plumbing, guttering, broken roof tiles, etc.

The picture on the left shows a mud shelter tube that subterranean termites have constructed over a solid object, in this case, a brick foundation wall in the sub-floor of a cottage. Subterranean termites travel in these mud shelter tubes as protection from predators, sun-burn, dehydration and to maintain a high humidity environment which is essential for their survival. Subterranean termites are highly secretive, preferring to enter a building through areas inaccessible to inspection, such as, through in-fill patios, fire heaths, expansion joints and cracks in concrete slab (on-ground) flooring. Subterranean termites can pass through a 1/8″ crack or an expansion joint (eating through the rubber compound) between adjoining concrete on ground flooring. They can also travel under parquetry and floor tiles to get to the wall framing timbers.

Only the worker termite caste can digest timber by the use of symbiotic protozoa in their gut. Worker termites feed their partly digested semi-liquid food, regurgitated from their mouth or passing from their anus, to the other termites, a process known as trophallaxis.

Subterranean termites have a well ordered social system with amazing engineering capabilities and an acute survival instinct; they obtain moisture from the soil and moist decaying timber, and communicate using pheromone signals. The mutual feeding, constant grooming and close social habits of termites are used to advantage in modern termite control baiting systems.

Certain hi-tech termite baits are now on the market that have a delayed lethal effect on termites which readily pass on the bait to other termites in the central colony nest during the mutual grooming and feeding. 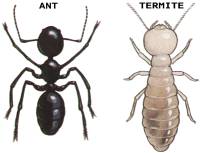 Subterranean termites need to maintain a high level of humidity and temperature (75 to 95F) in their central colony nest. Subterranean termites eat through the centre of susceptible timbers leaving nothing but a thin veneer of timber and/or paint. They will pack mud in cracks and joints in timber to prevent loss of humidity and resultant dehydration.

As noted above, termites constantly groom and feed each other. A valuable technique for the termite controller is to install and monitor a termite baiting system next to any live activity found in and around the premises where termite foraging is most likely to occur. Subsequent inspections (preferably monthly) may reveal dead or sick worker termites, they change colour to a mottle look, and spread of the termite bait to other termites leading to elimination of the colony. The termite baits are designed to be non-repellant to the termites and has a unique delayed effect. Time enough to be passed onto the other termites in the colony including the queen, with a sufficient dosage leading to the elimination of the entire colony. This process is explained in detail in the Termite Control section of this website.

Building Assistance Australia has teamed up with Australias premier termite control company as they have simple solutions and offers an unprecedented industry leading 50 year Warranty. Should your property be attacked by termites with their barrier installed and maintained, they will at their cost rebuild the entire house if necessary at their cost ! – No other company offer this level of cover

The protection Systems have been extensively tested and successfully used over the past two decades, and have been specifically designed to offer long-term termite management and damage prevention systems.

Together with today’s environmentally acceptable termite control agents, termite systems have been the perfect and effective replenishable barrier, yet minimise the total impact of the Environment.